The Russian Doll of Therapy 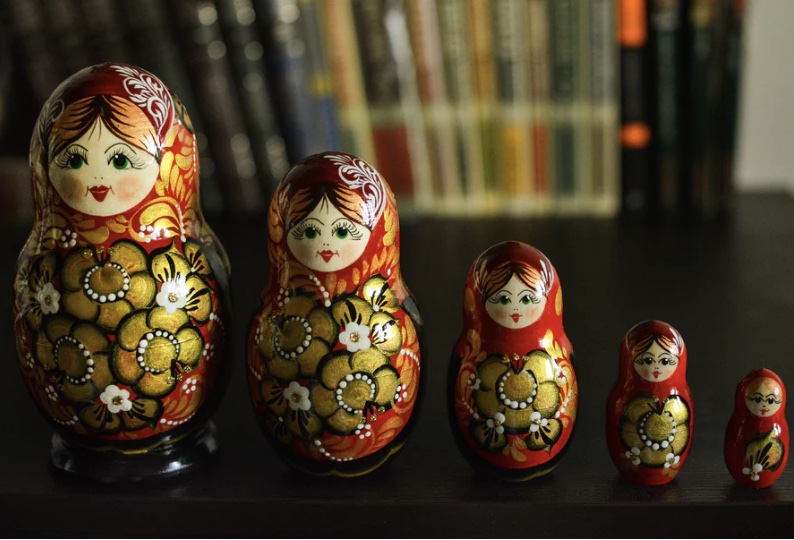 I used to love Russian dolls when I was young. There’s something about pulling apart the biggest Matryoshka doll to reveal another version of the figure until you get to the smallest doll that can’t be pulled apart, this version has no join or cracks. It’s a tiny perfect figure.

Clients often tell me that they’re looking for the real them, the person they are inside, the perfect version. They give me a list of the things that are wrong, the things that they need to ‘fix’ in order to be happy.

They’re surprised when I tell them that there’s nothing to fix. And that the version they’re showing up as right now is perfect as it is.

I know how they feel. I spent years trying to fix myself. I use to look around at the people in the room at the many NLP, TFT, Hypnotherapy trainings I went on and see that, whether they were coaches or wanted to coach, they, like me, were all trying to fix themselves.

It’s no surprise. Most therapy models tell us that we have to dig deep to find ourselves, heal our inner child or go through layers of pain to be happy and whole. And just like the classic set of Russian dolls, five seems to be the magic number for the layers, circles, and levels of neurosis.

Gestalt Layers
I’m not talking about shouting at empty chairs or hitting cushions but the layers that Gestalt founder Fritz Perls developed.

The first layer is the phony which is the fake and inauthentic ways people act to hide their true feelings.
Then there is the phobic. This is where people resist and deny their real selves.

The impasse is the next layer. This is where you feel empty and stuck and where you might manipulate the environment and people around you rather than deal with problems.
Then we have the Implosive layer. This is when you allow yourself to come into contact with feelings you don’t like and may have pushed inwards to keep these feelings out of conscious awareness.

The last layer is explosive. This occurs when the previous layers have been worked through.

The Five Circles
In this model, there are five therapeutic circles that need Investigating before shedding.

The outer layer is the cliche layer which consists of socially accepted behaviour. This is when you keep deep feelings to yourself in order to function at a solidly accepted level. An example is when people say that they’re fine when they feel anything but fine.

The next layer is impasse. This is where the client feels stuck, resistant, anxious, and confused. Therapists are said to like this layer. Hopefully, because they can see a shift happening and not just because they like seeing a client in pain. This circle is when two parts of self are locked In conflict.

Then there is the implosive layer/death layer. No this Isn’t permission to bump off anyone that’s annoying you. This is, apparently, when a client feels the pull of opposing forces and if the client stays with the feeling, they will eventually implode.
And then we finally get to the authentic layer where your client reaches the self and is able to express their feelings.

Do you see how similar … No let’s cut the crap, how both models at the same?

It doesn’t matter if the levels are called shitty or sparkling — they’re all made up!

The Five levels of Grief
These stages were developed by Elisabeth Kubler- Ross over 30 years ago and came about after she had listened and observed those dying of terminal illness and these stages of grief have become the standard by which all grief is measured.
But this indicates that there is a right way to grieve and if you don’t go through all the stages correctly, you’re doing it wrong.

I know from my experience that when my dad died, the grief I experienced wasn’t less or more than when my mum died four years later but it was different. That’s because I was different.
There can’t be a wrong way to grieve and the way someone grieves is personal and totally dependent on their thoughts about the experience.

Elisabeth Kubler Ross wrote, in her later years, that she regretted writing these stages as people took them to be universal and true. She had identified the common experiences that she observed to help people to normalise their experience. These stages were never meant to be required experience.

But these stages at often quoted as necessary and people are told that they have to get through the levels as quickly as possible to move on to the next.

There is an Easier Way
These examples indicate how willingly we take on someone else’s opinion of what is good for us and how we should act. How we accept an idea of stages and layers as real and authoritative rather than opinion.

This Russian doll of therapy takes you through levels of pain before catharsis but you can have relief and release emotion in a much kinder and simpler way by seeing what is causing the pain. When we see how all experience is generated via thought, there isn’t any need to strip away layers of pain.
Stripping away layers of thought is far healthier. Helping a client see that, as Syd Banks said, “Every human being is sitting in the middle of mental health — they just don’t know it.” but for their thinking is nourishing and nurturing.

The principles aren’t opinion. By nature of being principles, they are unchanging and always present, and this understanding to the inner Russian doll without taking months of pain and angst.